I raise my hand a lot in class. The unwritten rule of law school is to avoid being called on at all costs— and here I am voluntarily subjecting myself to scrutiny— so it earns me a lot of strange looks. But it’s actually immensely important to me because it’s important to me to take up space— not physical space, but metaphorical space. I will be heard because I belong here.

I am conscious that women, especially women of color, aren’t expected to talk as much in professional settings. I am conscious when I look around me that there isn’t a single other person who looks like me in the classroom. I am conscious of the expectation that I— as a Brown, Muslim, hijabi, woman of color who is a child of immigrants and a first generation college student— don’t belong in the legal profession.

More than that, when I raise my hand, I am conscious that that expectation almost kept me from applying to law school in the first place.

Up until a few months before applications were due, I had ruled law school out of my postgraduate future. I knew poverty exacerbates social inequities, and I knew I wanted to dedicate my career to making “justice and equality for all” a reality. Believing law is both the ultimate obstacle and the ultimate tool for social justice, being a pro bono public interest attorney called to me.

But I didn’t think I could. I was afraid. Every time I considered law school, nagging voices whispered in my brain. What if, despite my best intentions, my appearance became yet another obstacle in someone else’s chance at justice? What if because of the way I look— because of my hijab— a judge or a jury took an instant dislike to my client? After all, I had never seen anyone who looked like me in the legal profession. There must be a reason. And so I bought into the assumption, unexamined, that I should not pursue the law. In fact, it was for the greater good that I not pursue the law— that I stay behind the scenes where my “controversial” appearance could do no one any harm.

Eventually, I realized buying into racist conceptions of myself was probably not the way to go. I was doing as much harm as supposed-good convincing myself I couldn’t become a lawyer. I had the opportunity to actually change the disgust and distaste with which I viewed that proposition: if the problem was there were no lawyers who looked like me, I could be a lawyer who looked like me... and then, seeing me, maybe someone else later down the road would feel more vindicated in their pursuit of becoming a lawyer. And so here I am.

That hasn’t been the end of my concerns, though. The first year of law school is overwhelming enough as it is, but it has been even more daunting because of my profound feeling of isolation. Law school has been the first time I have ever felt at a disadvantage as a first generation student; without even another BA in the family, let alone a JD, I feel as if I am constantly fighting the uphill battle of carving my own path, while others can more easily walk the well-trodden trail of those before them. When career advisors say the goal in interviews is for your clothes to render you indistinguishable from other job applicants so employers can focus on what you are saying rather than wearing, it feels like a spotlight is trained on my hijab; I am incapable of being “indistinguishable.” I may be in law school, but I’m still not “what a lawyer looks like.” After all, the top result in a Google search for “hijabi lawyer” is a New York Times article on a woman who literally had to start her own law firm because employers didn’t want a hijabi in the public eye.

Don’t get me wrong, I haven’t regretted my choice of law school even once; Seton Hall expresses a profound commitment to diversifying the legal profession. I see it every day: from creating a new Executive Director of Diversity and Inclusion position; to having a myriad of identity-based student law organizations; to connecting students with community resources and mentoring programs designed to increase the participation of individuals from marginalized or underrepresented backgrounds in the law.

Thinking that with each success I am proving more and more wrong each voice who said “people like me” don’t become lawyers is an intoxicating antidote to self-doubt. Knowing that I am working each day towards a greater opportunity to effectuate meaningful change in my community is a powerful motivator.

And most days, that’s enough; but some days it all still seems insurmountable— like I’m looking centuries-old powerful institutions in the face, with only hope and sheer determination in my hand, challenging them to change. Who am I compared to the weight of history?

I am a firm believer that we stand on the shoulders of those before us— that we owe our triumphs to those who blazed the trail before us, and that our successes pave the way for those who follow in our wake. So I can only hope that no matter what happens to my career, my smallest contributions— from raising my hand and taking up space in the classroom, to writing this— can help someone else believe their dreams are more attainable than they think. And I’ll keep going until one day no one has to wonder anymore what a lawyer looks like— because a lawyer looks like them. 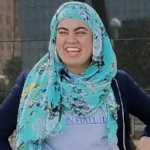 Hafsa Mansoor is a 1L at Seton Hall Law. She has BAs from Webster University in International Human Rights and Political Science. She wishes to pursue public interest law in order to use her education to empower survivors of domestic violence and dismantle institutionalized racism by restoring dignity to the marginalized.