It’s going to sound cliché, but as I approached the end of my 2L summer I started asking myself what I could do to leave the law school better than I had found it. It had been a bumpy road for me, largely because of my own struggles as a first-generation law student. Although I felt very confident about my own future, having secured a job offer with Debevoise & Plimpton LLP, I realized that others were dealing with similar issues and I decided that founding a First-Generation Law Students Association (FGLSA) at Seton Hall Law School was the way to go. With plenty of help from administration and other students, the group was successfully formed in September of 2018. The mission of the organization is to create a community for all first-generation students to come together to tackle law school and the legal profession with support. FGLSA now has roughly 60 members, with more joining every week.

My first law school experience was during Seton Hall Law’s "Road to 1L," where incoming 1Ls meet their classmates and get a taste of law school before orientation.  One item on the agenda was a mock class, taught by Professor Denis McLaughlin, a first-generation law student and lawyer himself. I was extremely excited … until class began. I could barely follow along, and when he asked questions and students began answering, several thoughts ran through my mind: “Why am I here? I don’t belong here. This was a mistake.” By the end of the class I realized that I was at a disadvantage compared to some of my fellow classmates given that many had legal experience or exposure and I had none.

Though Road to 1L was the first, it was certainly not the only such experience.  Fast forward to the fall semester of my 1L year. I attended the Seton Hall Law Judges’ Reception, where state and federal judges come to the law school to meet and network with law students and faculty. I remember feeling incredibly uncomfortable and overwhelmed. There were over 100 students and at least 30 judges in attendance. It took me twenty minutes to even approach a judge and group of students, and the conversation was about as awkward as you would expect between an introverted first-generation law student and a judge who could sense my discomfort.

During the conversation I heard the word “litigator” used. I wanted to contribute to the conversation, so I asked the judge something like, “what was it like being a litigator before becoming a judge?” I had absolutely NO IDEA what I had just asked him. I did not know the meaning of litigate, litigation, or litigator. He gave an answer that I also did not understand. Somehow, I escaped the conversation without embarrassing myself right out of law school.

After that event I knew that I needed some help. A “Law School for Dummies” book or something. This was when the idea for a first-generation law students group came to my mind. I figured that even if I felt alone in my struggles, there had to be at least a handful of other students who felt the same. While I wish my 1L and 2L year schedules allowed me the time to start the group sooner, I am still very pleased to have launched the organization during my 3L year.

We held our first event in January of 2019, titled “Shaping Your Narrative.” Four Seton Hall Law alumni – two in-house counsel, an Assistant U.S. Attorney, and a Seton Hall Law clinical professor – participated in a panel discussion and answered questions about their journeys as first-generation law students and lawyers. The questions focused not only on the struggles of being first-generation but also the benefits that come with it. One student asked about her own unique path to law school, something many first-generation law students can relate to. She felt embarrassed about bringing up certain aspects of her life in interviews and did not know how to leverage her past experiences into positive interview material. One panelist told her that she, like everyone else in the room, should be proud of her personal struggle to get to where she is today. Overcoming obstacles is something employers see as a positive factor when differentiating candidates, so she should disclose only as much as she feels comfortable sharing but be proud to share it. All the other panelists nodded in agreement.  It was probably the most important question addressed that day. A 2L student emailed me immediately after the event and stated it was the best panel discussion she had witnessed while at Seton Hall Law.

From faculty and administration, to students, to alumni, the support FGLSA has received has been tremendous. I am extremely proud of how far we’ve come in a short period of time, and I am eager to finish out the semester on a strong note. I am equally excited to contribute as an alumnus next year to help ensure FGLSA is successful for years to come. 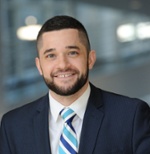 Omar Debs '19 is a CSJ Scholar at Seton Hall Law School Center for Social Justice. He was elected to serve as a Senator on the Student Bar Association and is the Treasurer for the Arab Law Students Association. He has volunteered with the Volunteer Income Tax Assistance (VITA) Program to assist low-income taxpayers and with the Eviction Clinic run by Volunteer Lawyers for Justice (VLJ) in Newark.